I went to Toronto last week. It was a really short trip, but I had a good time. For me, a good time consists of shooting a bunch of film. When I say a bunch, I mean 23 rolls (or more). There were some technical shortfalls; I got a bit over-confident that my new developer formula would “smooth that grain right out!”, then there was the roll shot at f/2 in broad daylight pushed to 1600 ASA… I can see your eyes glazing over, I can feel it—I’ll cut straight to the chase, the 23 rolls were crap. Mostly crap, at least. No amount of art speak or sideways squinting can save the grainy mush captured on most of those rolls. There’s one thing that I learned, which is that I am not one of the cool kids.

You see, the cool kids don’t focus. They don’t have to. They know, through this mysticism of hyperfocal distance, that if they use a wide enough lens and manage their shutter speed/ISO to maximize their aperture, they can have a very deep depth of field for an acceptably clear image, or at least what is perceived to be a deep depth of field. It’s a common misconception that a 25mm lens will have a naturally deeper DOF than a 50mm lens, but if the subject in the image is the same size, and each photo is taken with the same aperture, the DOF will be perceivably the same. So why does the DOF scale on a wide angle lens look so massive and it looks tiny on medium length and telephoto lenses? Because a wide angle lens does not magnify the field of view as much as longer lenses. Your 50’s and 200’s magnify the subject, and therefore have more planes within which to rack through focus. Of course, the reason that your iPhone always focuses pretty OK, despite the common misconception that smaller sensors have increased DOF, an appropriate field of view for a smaller sensor would need a longer focal distance (don’t confuse focal length and focal distance), which increases DOF. That is the bird’s eye view of a relatively complex optical law, which doesn’t take into consideration camera shake relative to focal length, how shitty the actual glass in your lenses are, and your (read: my) stubborn adherence to the idea that wide angles are just better because ‘MERICA.

Wait, what? You are still manual focusing, bro? No-no-no, auto focus is for suckers, too. Zone focusing? That’s kind of close to what I’m talking about—but I mean the REAL cool kids don’t focus at all. Zero. Think about any Garry Winogrand video you’ve ever seen. Does that dude focus? No. Mark Cohen? No. The cool kids are popping up on Instagram shooting disposable camera photos of their moody roommates with their septums pierced. BINGO.

So, I jest. But the level of disaster caused by The Toronto Mishap, as I’ve taken to calling it within the last 10 minutes, made me deeply examine WTF I did wrong. I was 1.) on the street, 2.) pointed the camera at things I wanted to take a photo of, 3.) used appropriate DOF theory with an 18mm Zeiss lens on 35mm film, 4.) smoked cigarettes when necessary.

Even though I’ve been shooting photos for 15 years, I didn’t really get into this de rigueur idea of not focusing until about 2 years ago. Most of us can trace our origins of modern photographic theory (IE hipster nouveau film shooters) back to Eric Kim’s blog (congrats on your nuptials EK), and though he’s a big proponent of zone focusing with a Leica M—the bare concept completely escaped me to the point that I ruined 4 or 5 rolls of film ‘zone’ focusing a 50mm lens at f/8. After all, Elliot Erwitt once said “F/8 and be there” right? Fast forward through a dip into digital, deep soul-searching and running into Gary Gumanow on the corner of 6th and Congress in Austin. He’s a mentor-ly type, great guy, good shooter. He showed me his Leica M6 and amazing Hasselblad SW-C. I remember watching Gary wield his M6 and 28mm Elmarit, he looked as much like an Olympic gymnast as a bald New Yorker in his late 40’s ever could. Most notably, he never focused. Wait… is Gary one of the cool kids?!?!? Yes, Gary is one of the cool kids.

Gary turned me onto the super-wide concept. I have to point out that I am dim. Today we can google pretty much anything we desire, and be passably literate within a reasonable amount of time. My dimwitted version of this is to stop listening when a credible authority on my desired subject has surpassed the bare basics of what I want to learn. I then shoot dozens of rolls of film in a confused state attempting to sort through what my mentor conveyed and what I recall scrawled on a bathroom wall. That’s the long way of saying that when Gary was explaining why wide angle lenses are great for candid photography, I started picturing turtles on skateboards after he got past basic theory. Fast forward 150 rolls of film and I’m not bad with a Zeiss 18mm in very certain conditions (focus at 1.5’, stopped down to f/16, dragging the shutter at ¼ second to give time to hand actuate the flash, film pushed to 1600. Flash acts as the shutter in the dark).

Luckily Gary was patient, and as I progressed with the Leica MDa and my 18mm, he started showing me more of his Hasselblad SWC work. 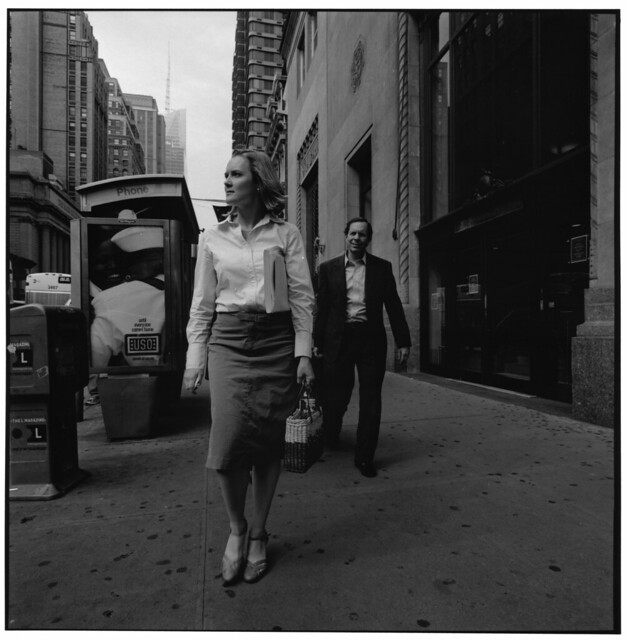 Keep in mind that as the size of film negative/sensor goes up, at the same focal length and aperture the DOF goes down. So by that rationale, medium format cameras should have a much shallower DOF, even with a super-wide lens? Mmm, kind of. The venerable Hasselblad SW-C (Supreme Wide Camera) is a 6x6cm format camera with a 38mm Zeiss Biogon lens permanently fixed to a shallow body. This is such a f*cking gangster camera that it doesn’t even have a way to focus; no rangefinder, no through-the-lens reflex action. It merely has a scale on the lens helicoid for approximating distance. I admittedly laughed at Gumanow every time he would pull that camera out. Later, when I had my own SWC, I realized that the DOF was indeed the same as any other lens at a given aperture, the wider lens merely allowed me to get closer to the subject and more easily isolate focus. It’s easier to guesstimate distance from 5-10’ away than 40-50’ feet away, with a depth range of 10’.

Reading up on Lee Friedlander, it was apparent that he’s hooked on super-wide lenses. America By Car demonstrates his prowess with the Hasselblad SWC. Digging a little deeper, I found that Freidlander challenged his friend Thomas Roma to build a panoramic 35mm camera. The resulting camera is the Pannaroma. Mr. Roma is a very highly regarded photographer that just seems to love making things. He went on to produce 31 units of the Pannaroma, among other cameras that followed the same vein of being panoramic cameras with compur shutters. According to Blake Andrew’s excellent interview with Thomas Roma, the original inspiration was the book Camera in Paris by Brassai. I haven’t read the book, but I can safely assume that at least part of the theory revolves around taking advantage of hyperfocal distance.

A moderate amount of cameras have been made to strictly take advantage of the super-wide focal lengths. The modern-ish Zeiss Ikon SW, the ancient-but-uber-cool 6x10cm Brooks-Plaubel Veriwide 100, etc; all demonstrate proof of concept. So… if I’m following this same concept, shooting with a 18mm razor sharp Zeiss Distagon, why are my photos shit? Often times the most obvious answer is correct. They’re shit because they’re shit. If a scene is not worth planting your feet, composing through the viewfinder and focusing appropriately, it’s not really a photo worth taking. And I was not using a fast enough shutter speed to stop motion. Surprisingly, 1/125th to 1/250th doesn’t get the job done when you’re converging with your subject moving at the same pace. Another thing to keep in mind is that Garry Winogrand shot millions of frames of film in his lifetime. His little ‘maybe I’m mental’ twitch with the camera might not have resulted in great photos. I suppose that if it were easy, we’d all be amazing photographers. Or none of us would be focusing.