One of the mitigating factors that keeps us from shooting street photography is a person’s innate objection to being photographed. As a human being with normal social skills you are taught not to invade one’s privacy and to respect a certain private space. 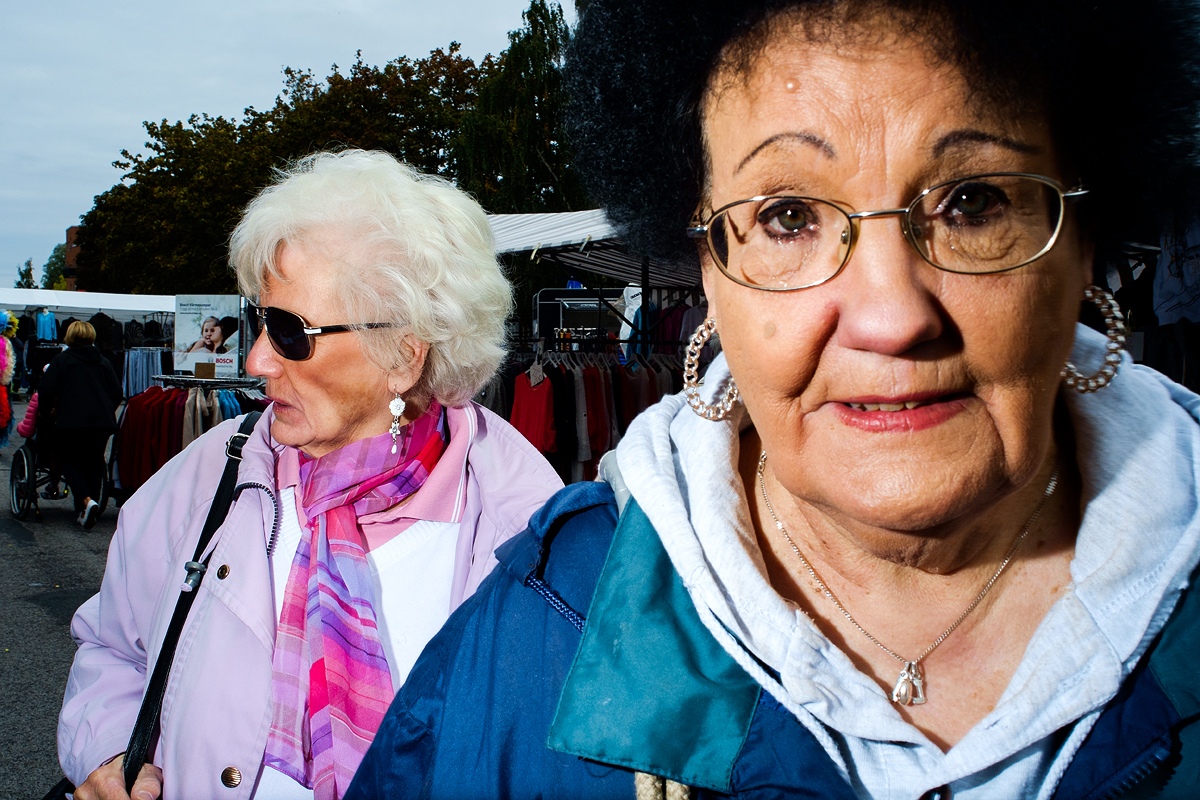 David Gibson wrote in The Street Photographers Manual that “this mindset needs to be undone completely, otherwise you will not be doing street photography properly.” I agree, but I will probably never lose a certain amount of restriction that I encounter when photographing people on the streets. I have to work my way in to a certain mindset and after a certain amount of shots, depending on the confidence level of the day, I am mentally ready to shoot. But it is a fragile state of mind, you easily get shot down and have to start over. When being confronted or questioned that is what happens, at least to me. 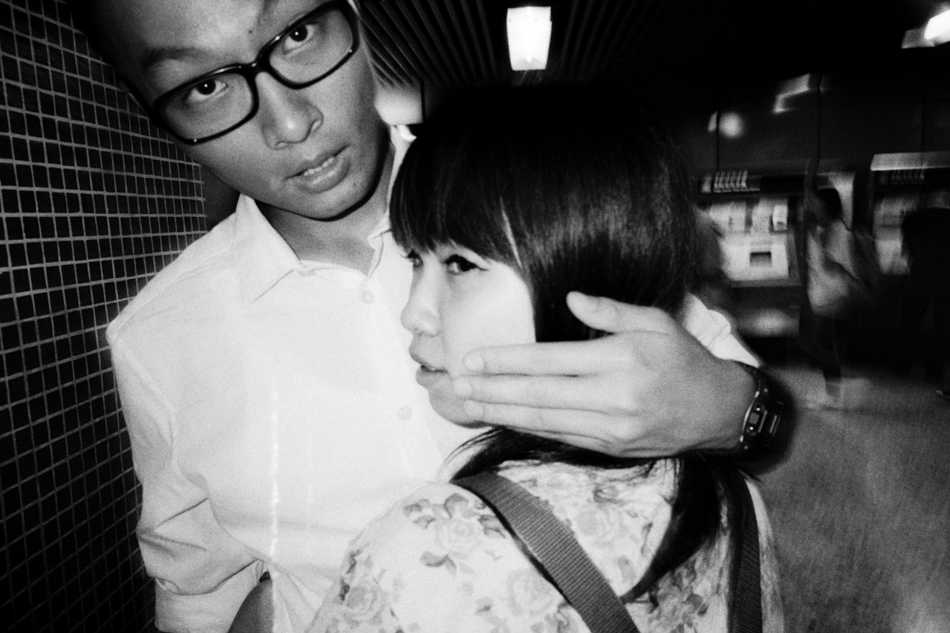 In The Street Photographer’s Manual Gibson also wrote, “If you are stopped taking photographs then you are doing something wrong”. There are different approaches, but I have actually never met a fellow street photographer that does not get stopped from time to time when shooting, be it from aggression or just general curiousity. In my own case, I must be doing it wrong because I am constantly stopped, constantly questioned—and it gets to me. It pervades my mental zone that is needed to shoot. In the end, it takes some time to slowly build back up the confidence to continue. Some might argue that I have to suit myself for photographing people close with a flash and I can understand that. I understand that some people might question what I am doing and why I would take a photograph of them. But it is my right to do so and when I have explained that I am a street photographer making photographs in public and that I have all the right to do so, I would like to be left alone. But that seldom happens, people that confront you have made their mind up and are convinced that they have all the rights on their side and that I am doing something wrong and even illegal. In some way I guess it is part of the game and something we as street photographers have to learn to handle. 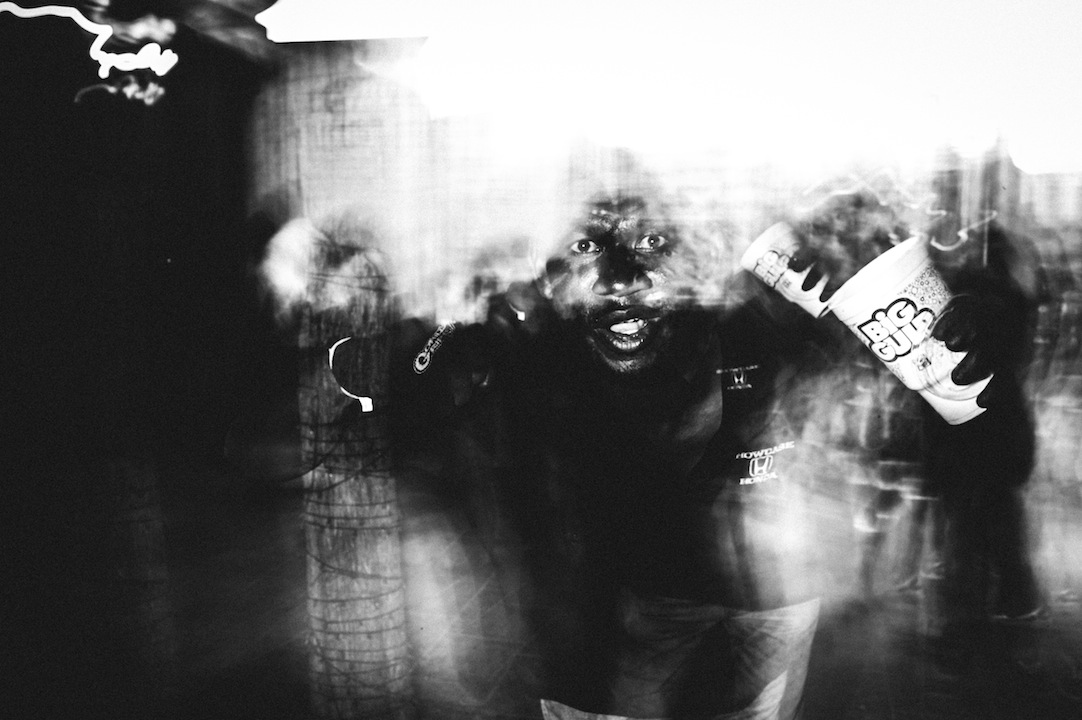 Martin Parr said in his video The Last Workshops “having that person react to you violent or gently is an occupational hazard. There is going to be one in each 100 or 200 shots. The danger is when you get one of those, it really is going to throw you back.” It is quotes like this that I find very helpful regaining confidence, to learn that there are others, even Magnum photographers, that have to deal with the exact same stuff as I do. So having people react to what we are doing is unavoidable but is there are ways to minimize the reactions. Introducing flash into street photography is a factor that almost unequivocally leads to confrontation. It is hard to hide that you actually took the shot. On and off camera flash is also a factor that varies the degree of confrontation. Photographer Charlie Kirk talks about this in his Flash and street photography – a guide. “a photographer that raises both arms as he takes a picture can be quite intimidating, which results in more confrontations and less “natural” photos.” 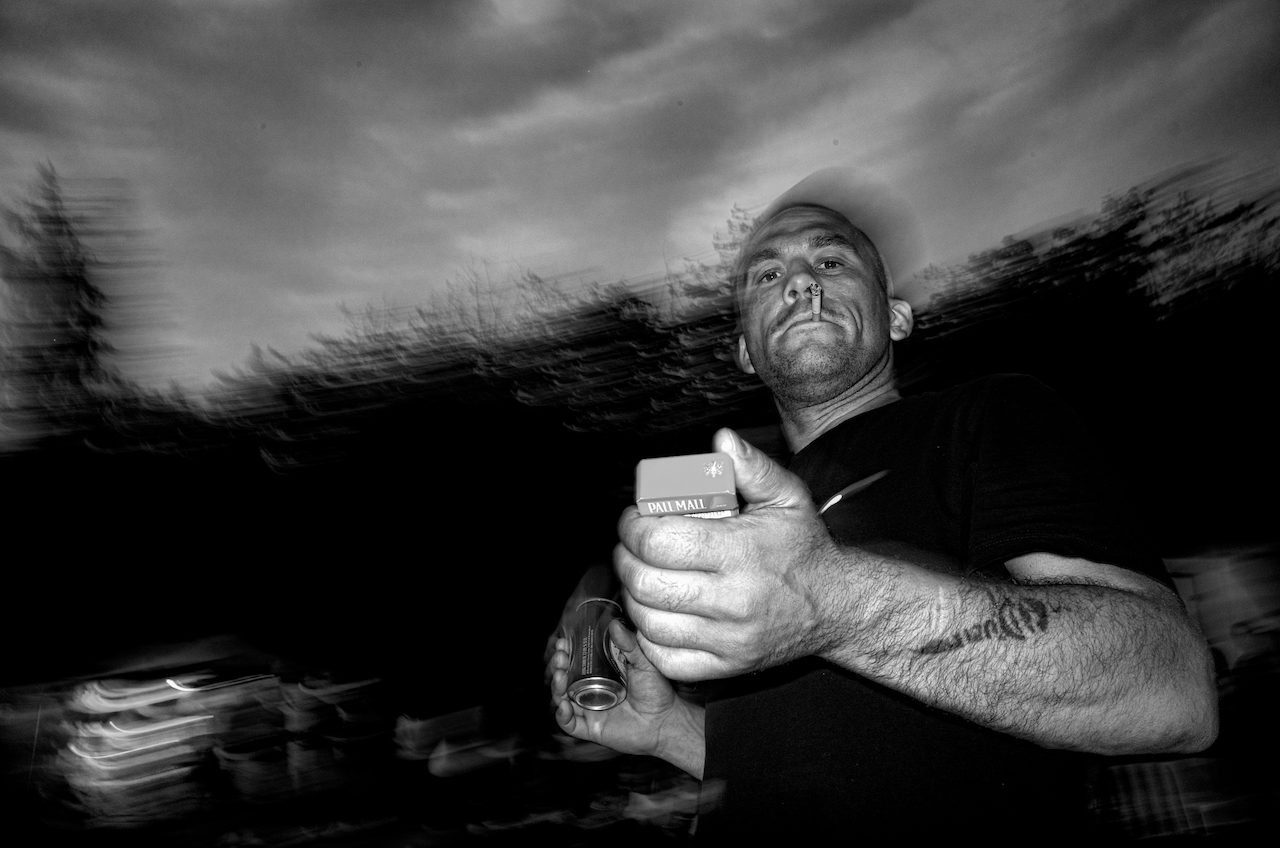 Martin Parr who uses on camera flash shows his technique in the video The Last Workshop, on how not to get too much attention, he positions himself then takes flash shots in a different direction while keeping an eye on the subject and when the subject doesn’t give him any attention he quickly turns the camera to where he wants his frame. Then continue to shoot a few shots in that first direction and most importantly never gives eye contact, never looks guilty. When shooting without flash the confrontation rate goes down rapidly. I realized this myself a while back when I shot with flash in my usual manner, when a woman confronted me about what I was doing, telling me it was illegal and then later brought up ethics. I answered as always, polite and smiling, that I was a street photographer and that I had every right to take photos of people in the street and finally asked her how she thought photographs in public was made. She didn’t give up and she actually followed me around for a while. This made my confidence drop to the degree that I actually shot the rest of the afternoon without flash. As I had this blog post in my mind I actually used that day as an experiment. As I shot without flash, people didn’t care. Some even smiled and kind of posed when I was approaching. There where some that asked if I took their picture, but as I was fed up with the discussion I denied they were the subject and they found that acceptable. Something that never would happen with flash, it is hard to deny a shot with flash. 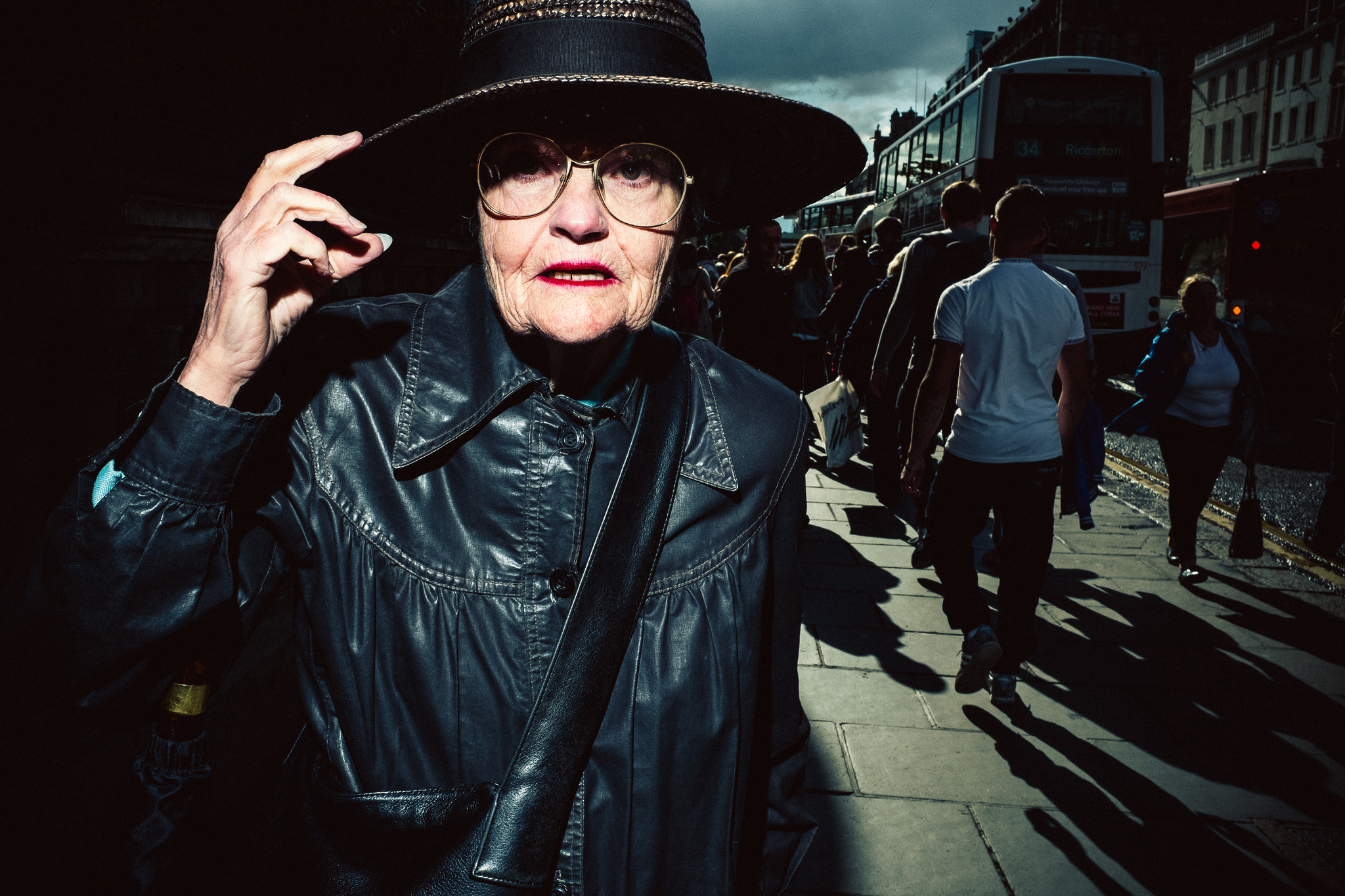 While Parr uses his “shooting in the wrong direction” strategy, Eric Kim smiles and just shoots away. Bruce Gilden walks straight up to his subject leans in and takes his shot, then he says thanks as he walks away. Myself I avoid eye contact at every cost, usually walk in and take my shot and walk away and I don’t stop if they don’t catch up with me. In that case I take the discussion, but you know when someone has had the energy to actually hunt you down, they feel violated and are determined to tell you off no matter what you say. I used to take my shot, give a smile and say thanks, but that just got me in more trouble. But there’s always situations where it doesn’t matter how you approach the shot, you will get in trouble. There are even situations when you wasn’t even thinking about taking a shot and still people react to the fact that you have a camera. I actually was shouted at from across the street once. This lady wanted to know if I took her picture. I had just parked my car and had the camera around my neck. Hadn’t even adjusted any settings or anything. In those situations I just get mad, can’t I even walk down the street with a camera? What are people afraid of? As street photographers we will get reactions and sometimes we will get confronted. So what do we say to defuse the situation? I probably tried it all, truth, lies and in between; and explanation of street photography, flat-out denial, explaining that I’m working on a book about the city and its people, etc—but most often, I just have to admit that I am a street photographer, that I found something interesting with them, and give them my card. The card gives credibility, and people feel better knowing they can contact you through the website should they need to. 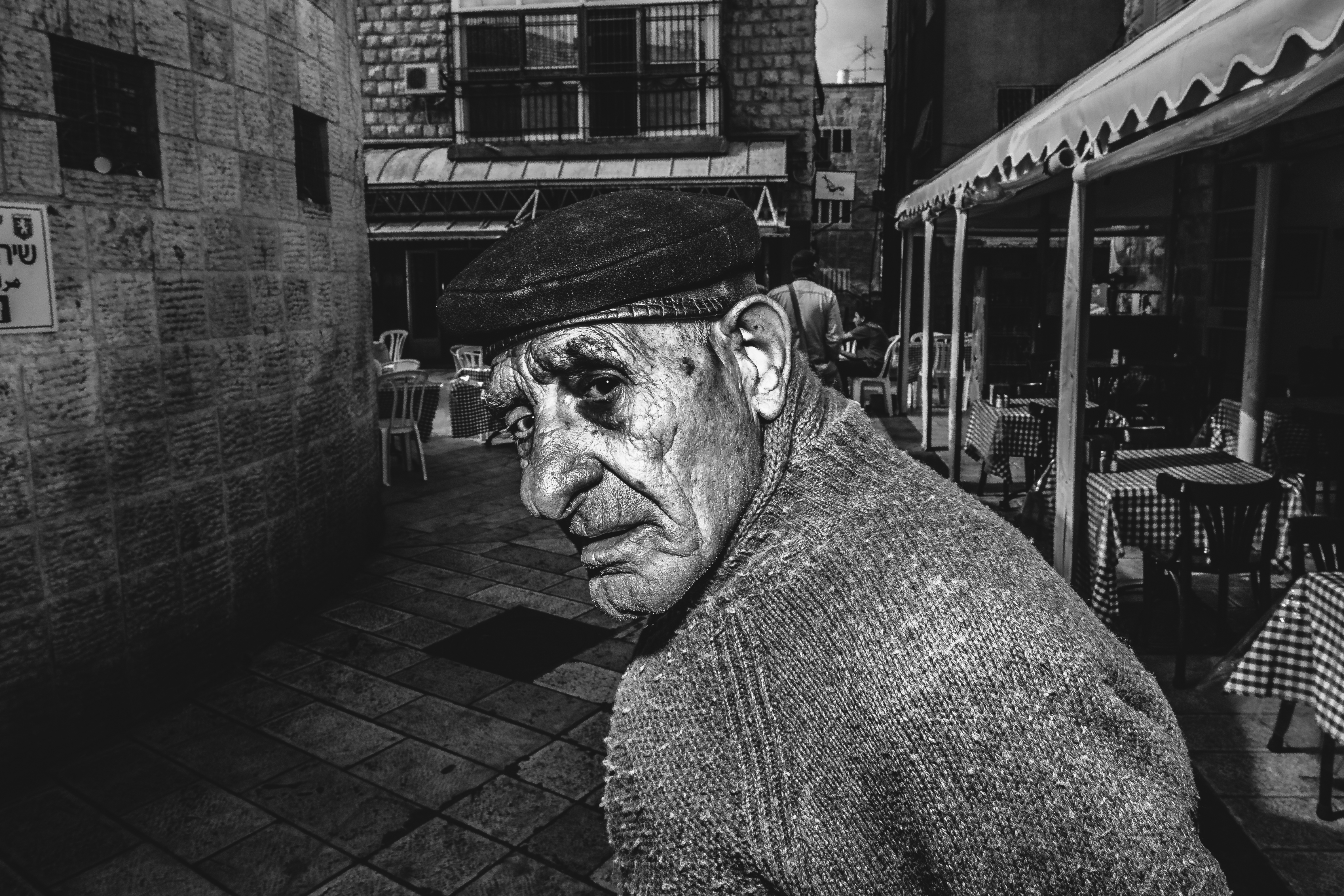 They get calmed down when they know where to find me. For what reason I don’t know. My conclusion is that we will get confronted. When shooting with flash even more often. When you get close to people on the street you will invade private zones and when a certain kind of person feels violated by this, they will attack. How to get out of those situations differs from time to time but I found it easiest to get out with least damage when you have a good reason for taking the shot. An explanation that the subject can understand. But as said, if they hunt you down to confront you. They don’t want to listen. Police have been called on me, I’ve been threatened with violence by a very angry carnival worker, almost got strangled from my own camera strap by a large African woman, shouted at, hunted down several blocks by an angry older woman, cursed at and spit on just for having a camera around my neck and so on. But as Parr said “Having that person react to you, violent or gently, is an occupational hazard… And you can’t have it both ways basically”. Even though I find The Street Photography manual to be a great book and I hate to argue with a great photographer like David Gibson guess I would like to change his quote to: If you’re not stopped taking (flash) photographs then you are doing something wrong. 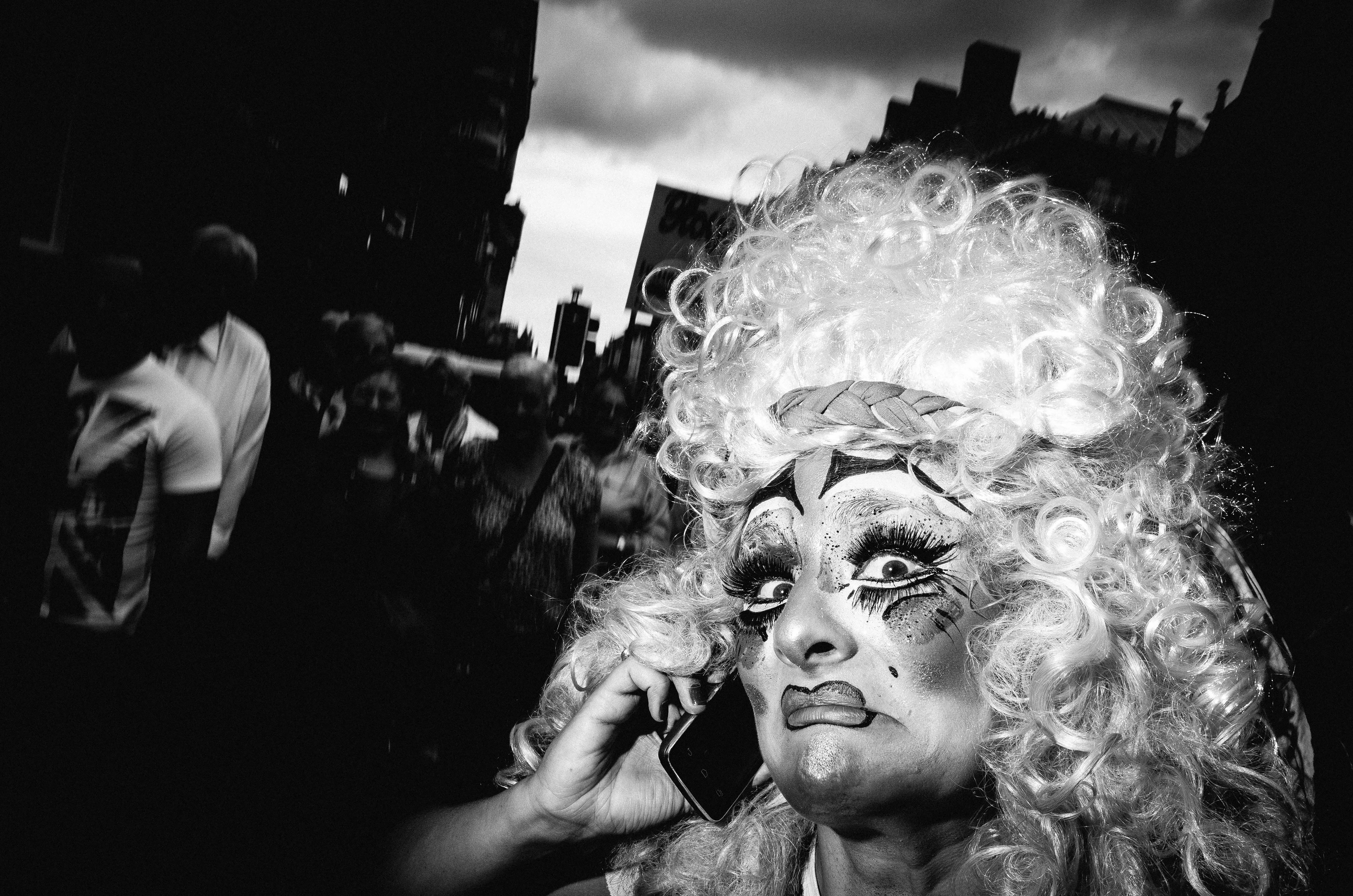 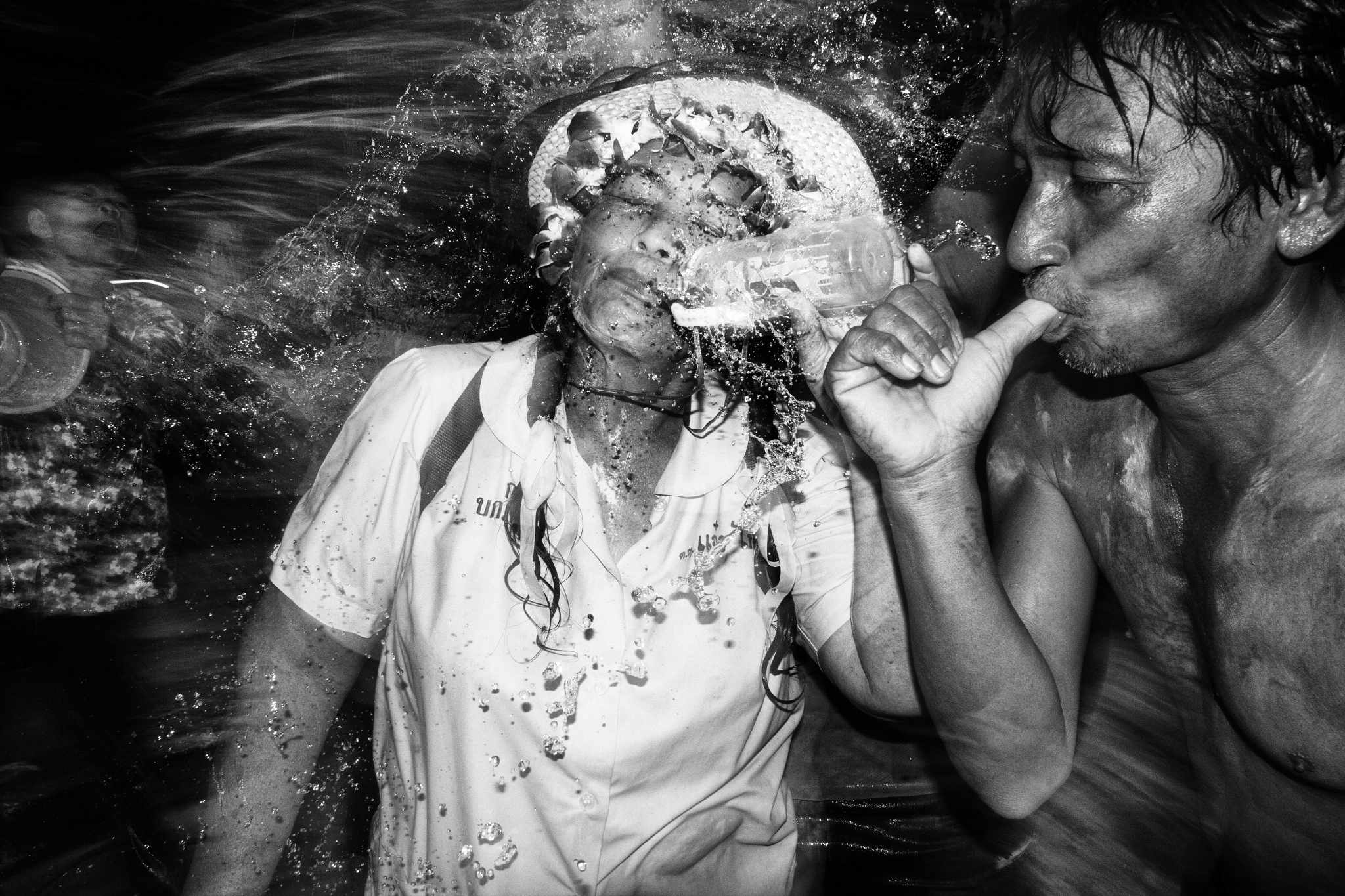 Be the first to comment “Confrontation in street photography” Cancel reply